And watching the show hasn’t just been a passive activity. Viewers all over the world have been talking about the show using the hashtag #squidgame, flooding the web with comments, gifs, reactions and images.

Here’s a look at some of the trends and numbers Squid Game has been generating.

Mentions are exploding all over social and digital

Even though the show was shot and created in a span of two years, it only took two weeks for it to become a global internet sensation.

Surprisingly, Koreans aren’t as impressed with Squid Game as everyone else in the world. In fact, a lot of people in South Korea found the show “poorly acted” or “not up to the mark”. But Americans, Canadians, Brits, Indians, and many more people from all over the world love it. The show quickly became a widely searched term on Google globally just after its release on September 17th. 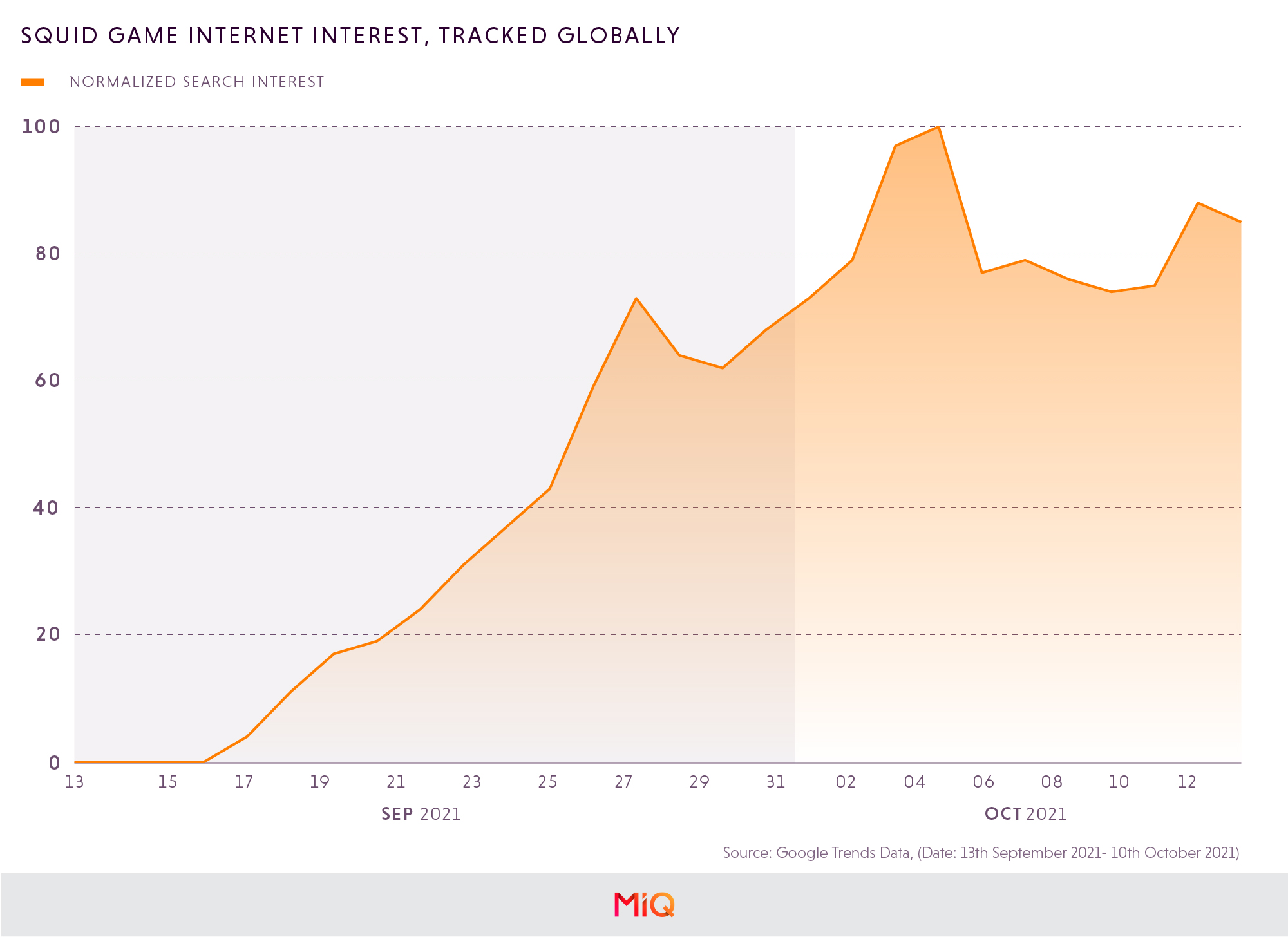 The hot topics on Reddit for fans are the characters, the games themselves and strategies . The level of intensity on the discussion forums shows a clear inclination of people to really put themselves in the player’s shoes.

Tweets, meanwhile, are less discursive, with the most traction around #SquidGame arts and merchandise. People are looking to buy anything that represents the show at the moment, and marketers should make a note of this in-demand opportunity. 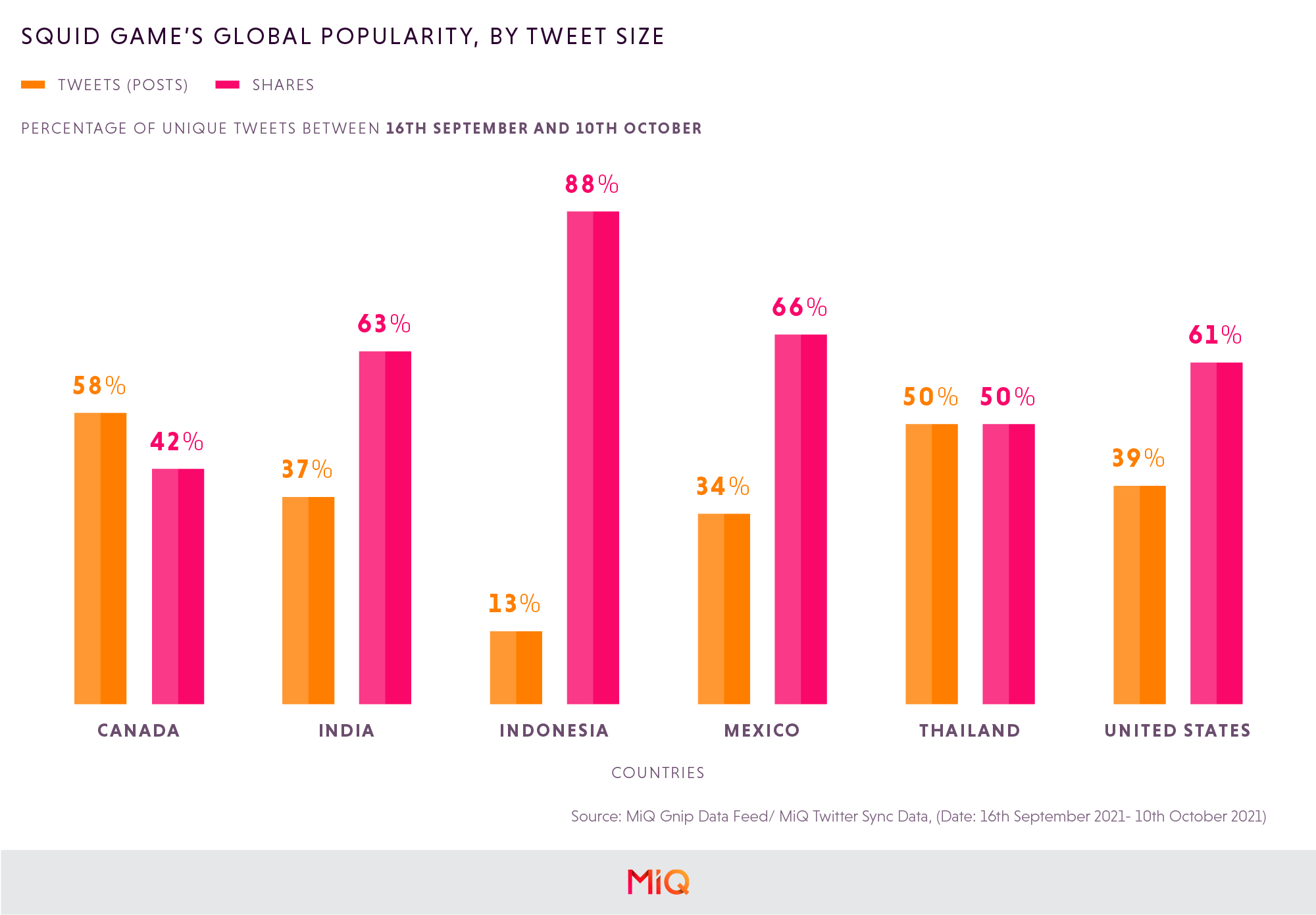 Memes (and spoilers) are dominating the attention of the majority of viewers.  Looking at tweets showed that Americans have shown the highest interest in this show, reaching a peak at 5pm with consistent interest in the mornings and evenings. 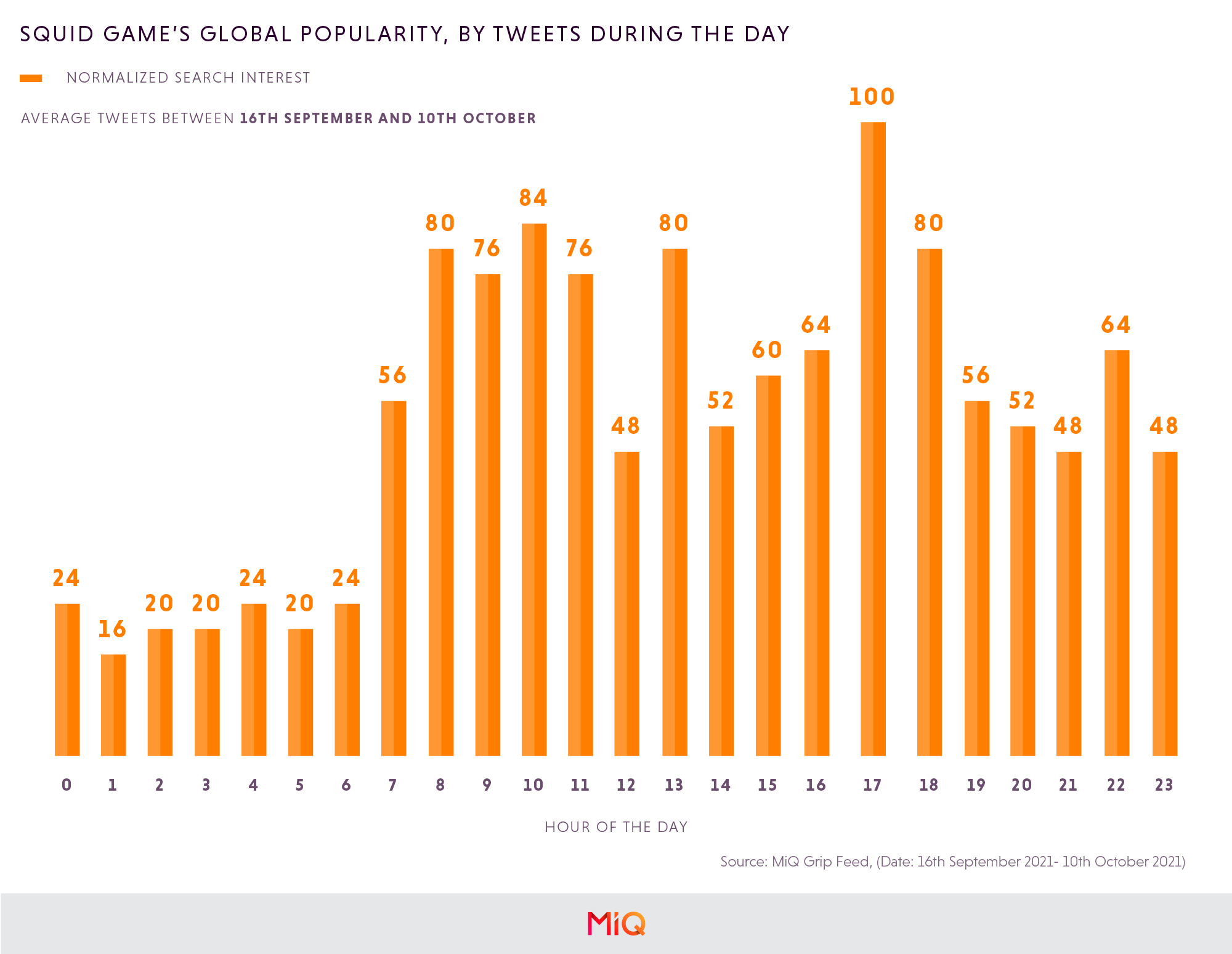 Consumer sentiment around Squid Game has been mostly positive, focused on the games represented in the show – with a significant audience demanding a video game based on the show. There still is some controversy seen in 21% of tweets being negative due to the brutality of the show. 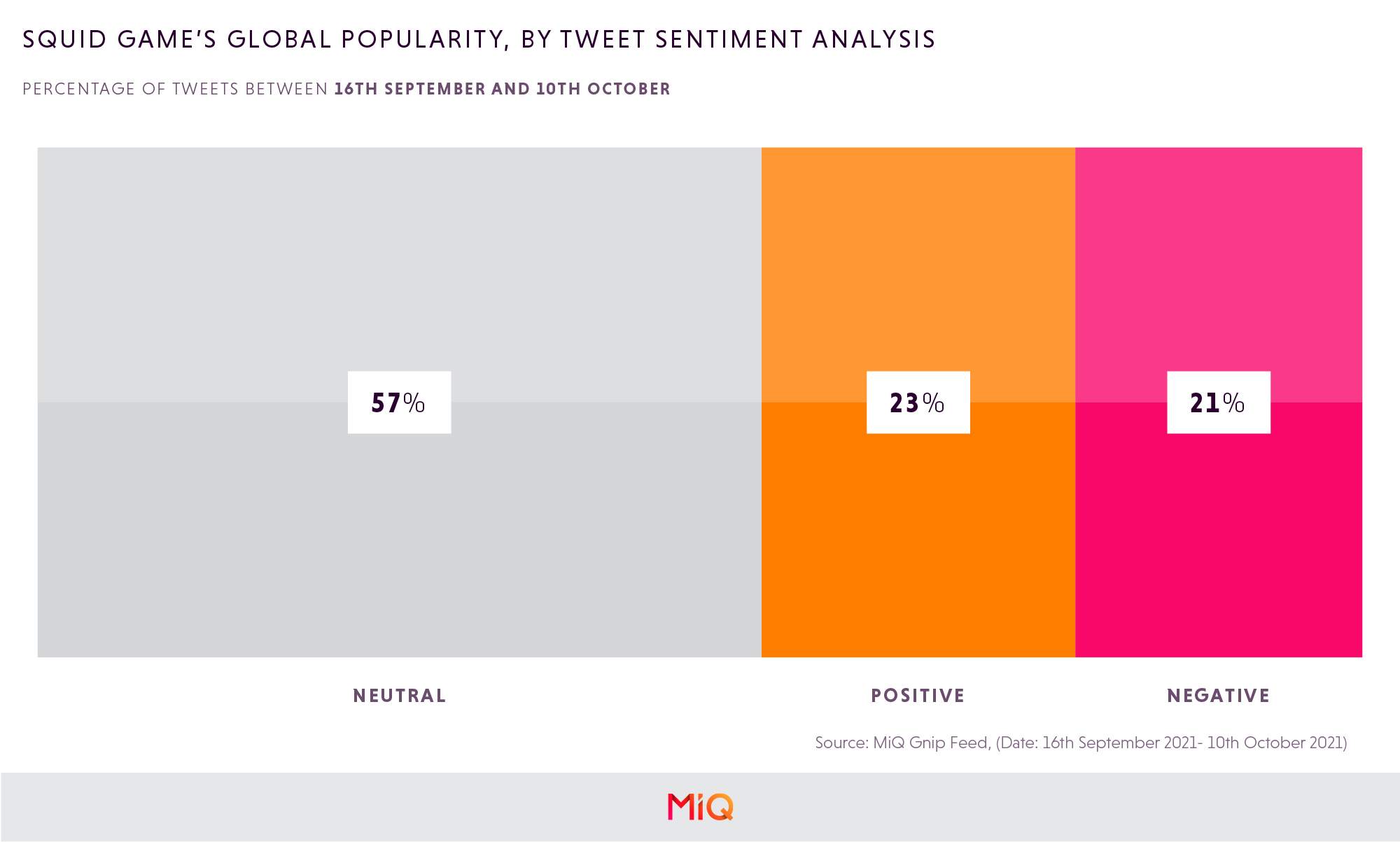 The positive tweets mostly revolve around goods and merchandise, while the negative tweets are focused on the cost of survival which entails winning the game.

There’s a definite mix in positive and negative search terms surrounding the show. But what matters is that there is real interest in the show and now is the time to cash in on that. Some people may call it a ‘masterpiece’ while others say it’s ‘scary’ and yet they are still tuning in and interacting. 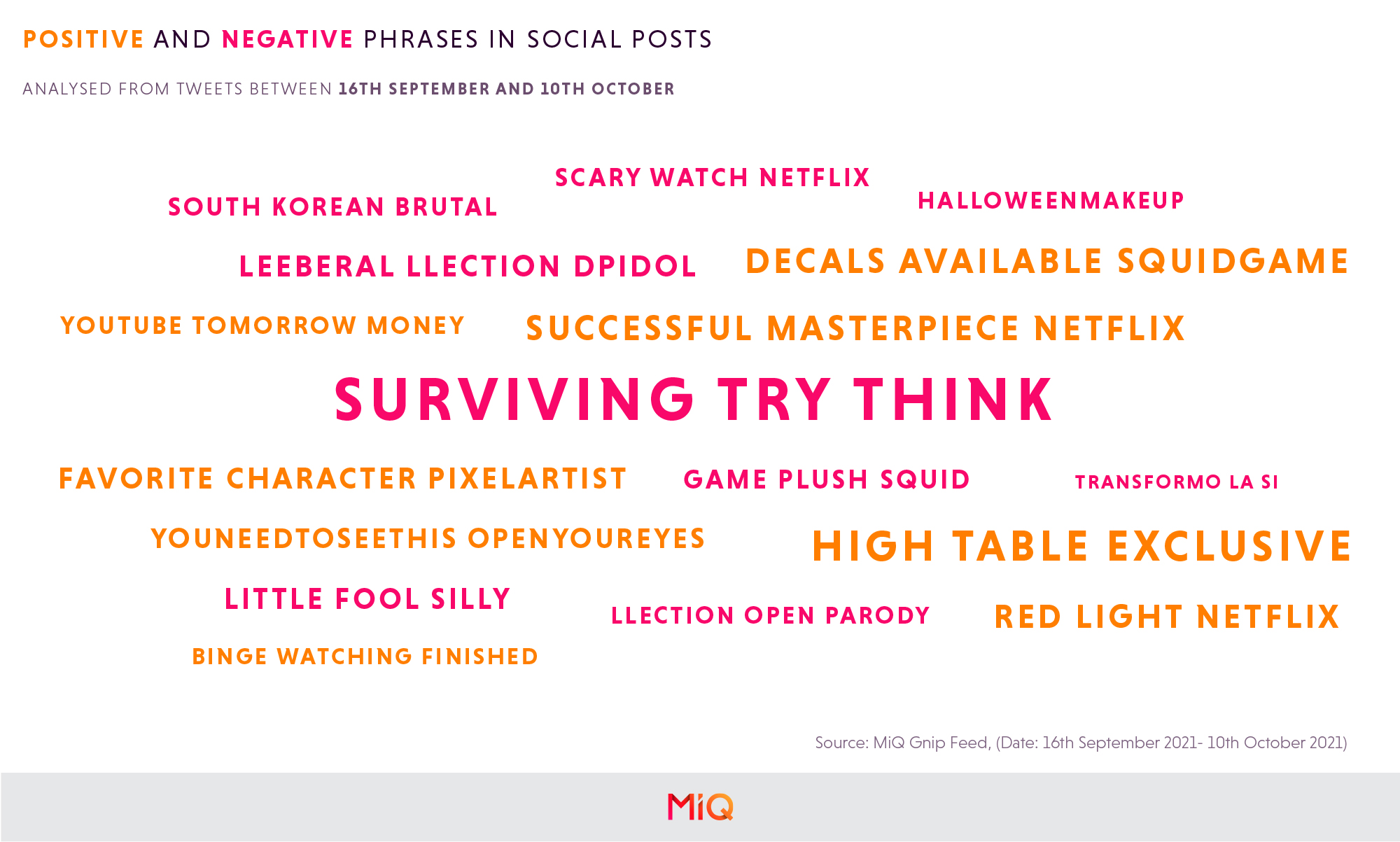 As with any viral hit show, there’s a short window of opportunity for marketers to use the premise, characters or idea behind the show in their outreach. Tying your brand or product to Squid Games could help attract a new audience that likes the show and now sees your brand as on trend but you have to work fast.

Looking for a partner to help you reach the right audience fast? Let’s talk.