The unprecedented spread of COVID-19 is causing changes in the way people live, the way they shop and the way they interact online. And those changes are happening quickly.

We want to keep you as up-to-date as possible with what’s going on – the insights we’re seeing across the world, the new trends in consumer behavior, and the lessons advertisers and marketers need to learn at lightning speed – so you can stay informed, adapt your plans, and respond to what’s happening in your market.

That’s what our new weekly podcast is all about. This week, we discuss how coronavirus is changing the audience for online gaming, and we talk to Erin Madorsky, MD of MiQ New York to discuss how cause marketers should respond to COVID-19.

Listen to the Insights Track podcast on Spotify or Soundcloud.

TV ISN’T THE ONLY CHANNEL CONSUMERS ARE TURNING TO.

Social distancing and quarantining has already made a measurable impact on video, TV, and OTT consumption. But this trend has also extended to video games, where we’ve seen significant increases in gaming, both online and on mobile devices, computers, and gaming consoles.

In addition to a surge of activity on online and app-based gaming platforms, console gaming has increased across every one of our measured regions, with the largest spikes observed in the US and UK, where time spent playing games on consoles has increased by nearly 40% compared to pre-lockdown levels. Canada and Germany have also seen increases in the 15% to 18% range since distancing/lockdown measures began.

CONSUMERS RUSHED TO BUY CONSOLES TO HUNKER DOWN WITH.

In addition to increased time spent playing, we’ve also seen a major increase in demand for the consoles themselves – purchase intent for the Nintendo Switch, Sony PlayStation 4, and Microsoft Xbox One spiked following the lockdown, increasing by almost five times compared to the start of the year and rivalling intent/demand spikes traditionally seen on Black Friday and Cyber Monday.

We’ve talked at length about Advanced TV and the pandemic’s impact on viewing habits but it’s important to note that one key outcome of this is that every console-equipped home is also equipped with a Smart TV device, by virtue of the fact that consoles can be used to run OTT apps like Sling, Netflix, Hulu, and other services. These new purchases will remain in their homes after the need for lockdown and social distancing have passed. 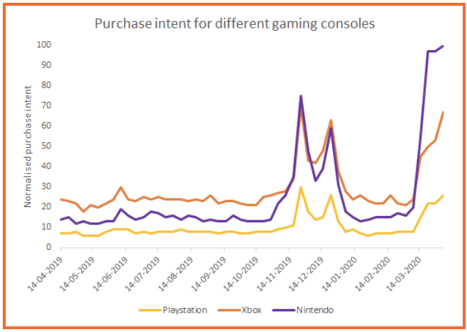 People aren’t just playing more games, they’re also consuming more gaming-related content online. Over the last few years, watching live or recorded streams of games being played has skyrocketed in popularity and stream views have also increased. YouTube Gaming has continued to grow as a key platform for watching gameplay videos online, and Twitch and Mixer have also seen gains during this time. On the whole, the audience for streaming/watching gameplays has increased by 8% since the start of the lockdown, and average viewing times have increased by 14%.

Looking at Twitch viewership stats, we can see that streaming activity (in terms of total hours) has increased 48%. Not only are more people tuning in to watch streams, but they’re also watching for longer periods – 21% on average. And while delays in recording and shooting may lead to a dearth of high-quality scripted content soon, there’s no shortage of streamers – over the last 30 days we’ve seen nearly one million (989,000) new broadcasters added to Twitch, an increase of 43%. As a result, the number of viewers per Twitch channel has actually decreased.

Viewer distribution across the top 100 games

Change in average viewership for the top 10 games on Twitch: 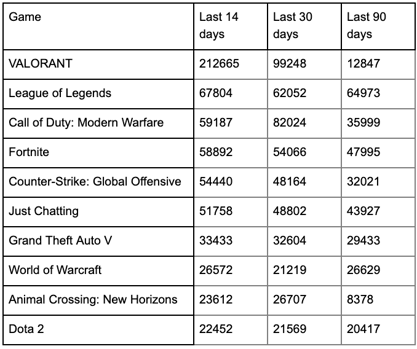 In addition to Twitch and Mixer, YouTube Gaming is fast emerging as a popular medium for audiences to stream and watch online gaming streams, biting into the share of the traditional streaming platforms (YouTube had already been massively popular for pre-recorded gameplay videos, less so for live streams). Continuing a strong showing from Q4 last year, the gaming segment on YouTube grew its user base an additional 14% over the last 30 days.

While gaming audiences have been getting older, streaming gameplays is still a young person’s activity. People ages 18 to 34 account for almost 72% of the audience, though over the last 30 days we’ve seen an increase of 13% in the number of people over 35.

WEEKDAY VIEWING IS WAY UP

Similar to what we’ve seen for TV, streaming of games on weekdays has also seen a lift of about 13% compared to the 7% increase seen over the weekends as people throw on streams while they work.

CASUAL GAMERS ARE SHIFTING FROM PHONE GAMING TO PCS

Console gaming is only a small piece of the gaming puzzle these days. Mobile and more casual gamers make up the majority of the gaming market now. Over the past month we’ve seen an increase in online gaming as consumers have more time at home, though it’s interesting to note that the majority of that growth has been for web-based gaming compared to in-app. This suggests that consumers are spending more time in front of PCs and laptops, and shifting to ad-supported experiences on those, rather than their mobile devices. 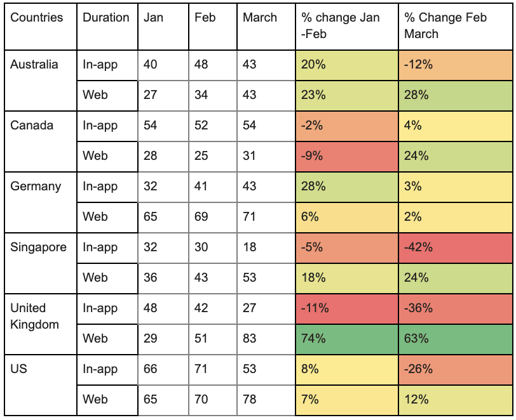 For advertisers looking to target an in-app audience base, this medium has its own advantages, with 1.3x higher dwell times and a 2.4x higher likelihood of the consumer returning to the platform. People are playing more web/browser games, but they’re more loyal to their in-app experiences.

CARD GAMES AND BOARD GAMES ARE BRINGING PEOPLE TOGETHER

The lack of physical and social contact during the pandemic has given rise to more online interaction, both with friends/family and strangers online and online card and board games have emerged as a popular category for enabling this interaction. This is especially true for people in the 18 to 34 age group, who have been 1.4x more likely to engage with online board and card games. People 45+ have also been engaging more with online games, with a primary interest in puzzles and brain teasers.

Normalised activity on gaming domains/apps across platforms by regions

Gaming inventory represents a relatively safe space for advertisers to reach consumers looking to take their minds off the current anxieties induced by the pandemic. Since the outbreak, we’ve seen an increase of almost 60% in impression opportunities on gaming domains and apps, with the largest increases in the US, followed closely by the UK.

Increases in Online Inventory and Usage Across Gaming Domains: 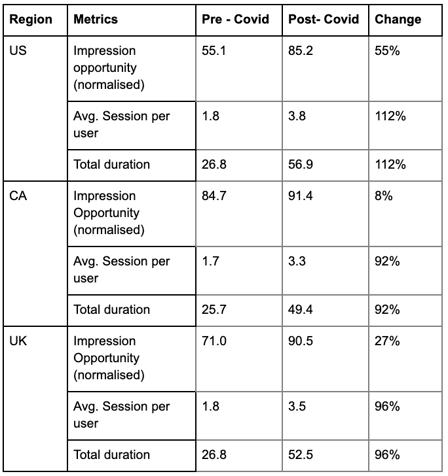 As with the changes we’ve seen to TV viewing, there’s good reason to believe that many of these habits, particularly among older consumers, will carry over into the post-COVID landscape. Consoles purchased during the outbreak will remain in homes, turning TVs into smart TVs, games and streams discovered will become favorites, and new streamers will find they want to continue after social isolation has ended. E3 may not have happened this year, but interest in games hit a fever pitch all the same.